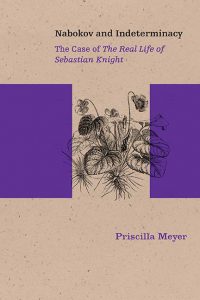 « In Nabokov and Indeterminacy, Priscilla Meyer shows how Vladimir Nabokov’s early novel The Real Life of Sebastian Knight illuminates his later work. Meyer first focuses on Sebastian Knight, exploring how Nabokov associates his characters with systems of subtextual references to Russian, British, and American literary and philosophical works. She then turns to Lolita and Pale Fire, applying these insights to show that these later novels clearly differentiate the characters through subtextual references, and that Sebastian Knight’s construction models that of Pale Fire.

Meyer argues that the dialogue Nabokov constructs among subtexts explores his central concern: the continued existence of the spirit beyond bodily death. She suggests that because Nabokov’s art was a quest for an unattainable knowledge of the otherworldly, knowledge which can never be conclusive, Nabokov’s novels are never closed in plot, theme, or resolution—they take as their hidden theme the unfinalizability that Bakhtin says characterizes all novels.

The conclusions of Nabokov’s novels demand a rereading, and each rereading yields a different novel. The reader can never get back to the same beginning, never attain a conclusion, and instead becomes an adept of Nabokov’s quest. Meyer emphasizes that, unlike much postmodern fiction, the contradictions created by Nabokov’s multiple paths do not imply that existence is constructed arbitrarily of pre-existing fragments, but rather that these fragments lead to an ever-deepening approach to the unknowable. »