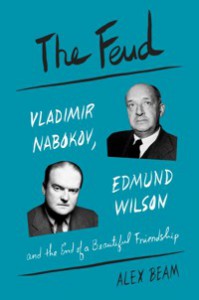 In his most recent book, Alex Beam details the disintegration of Vladimir Nabokov and Edmund Wilson’s friendship.

« The dazzling correspondence between Vladimir Nabokov and Edmund Wilson, two giants of 20th-century letters who met in 1940 and kept in close touch through the 1950s, is legendary. Less well known is their falling-out, triggered by, of all things, a Pushkin translation: In 1965, in The New York Review of Books, Wilson called Nabokov’s version of Eugene Onegin “disastrous.” When Alex Beam, a columnist for The Boston Globe, recently learned about the feud, he “burst out laughing.” How could such men be so silly?

His probing has produced a concise portrait of “literary malice,” which he notes was a specialty taught by a favorite secondary-school teacher of Nabokov’s. It is also contagious, as Beam demonstrates. His acerbic account of even the “beautiful friendship” phase isn’t flattering. The multilingual one-upmanship, the barbed assessments of each other’s work: Why, you’ll wonder, did the two enjoy spending time together?

Beam’s caustic treatment of the “seven-plus years of malicious rhetoric” that ensued after Wilson’s review is mercifully brief. If all the hifalutin nastiness is enough to leave a bitter taste, it also inspires an intense urge: to return to the books that show both writers at their best. »